A group for people building Freeduino development board kits, hosted by members of the SOLDER group, which normally meets on Tuesdays.

Dates of workshops: To be announced in the [[http://www.electronclub.org/webcalendar/ | Calendar]]. There will be three workshops held during July and August, though you'll probably only need to make one or two to complete the building of your board. 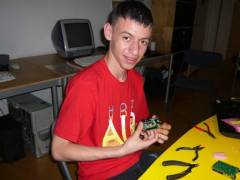 Freeduino is a free-form version of the Arduino, in that it is not developed under a centralized design process. There is no Freeduino team, or anyone to ask permission of: anyone, anywhere, can design and produce a Freeduino product, no questions asked, no royalties paid. It's sort of like electronic-hardware anarchy - or democracy, depending on how you look at it. We derived the Freeduino files from Arduino for exactly this reason: to see what the Arduino project would have looked like if it had open hardware distribution and manufacturing. 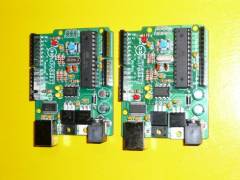 Getting Started with Arduino (Make: Projects) Make Books, 2009 ISBN 0596155514 This basic introduction to the Arduino platform, suitable for complete beginners, explains the ethos behind the Arduino project and provides simple programming examples to help you get to grips with the board. However if you have experience of programming microcontrollers, you may wish to look at the book first (available at the Electron Club during the workshops) to check whether it's useful to you. More detailed examples and programming hints are at the Arduino homepage, listed above.

What's involved in the building process?

During the workshops you will be soldering the electronics components to the Freeduino printed circuit board using a soldering iron and solder. No prior experience of soldering is necessary, as guidance will be given during the workshops. A short presentation will be run to let you see the possibilities of the Arduino platform and what's involved in building the kits. This kit is suitable for beginners and a great introduction to soldering and microcontrollers in general.

You will find some people in the workshop are already proficient at soldering so there will be plenty of help and guidance if you haven't done this before. If there are any problems with the Freeduino boards during or after assembly we have test equipment which can help diagnose and correct the issues. We hope everyone will go away with a working board - and a limited amount of spare parts provided should ensure this!

Other information for builders

This kit is the basic development platform for deploying Arduino code into a programmable microcontroller to build your own projects. It includes a number of standardised connectors which allow you to connect project-specific electronic components to design the board to behave the way you want.

The building sessions are intended to give you a board which allows you to explore the platform and design your own programmable electronics projects. It is hoped an Arduino course will run later this summer/autumn of 2009 at the Electron Club for learning more about this. You will need other electronic components to try out the capabilities of the board, and a small list of suggested components will be announced during the course, with examples available to play with if you complete the board during the sessions.

Stuff to bring along to the workshops

Kits will be supplied at the workshops themselves for those ordering through the organiser (Ross Feilen - gm7wed@ntlworld.com). As we have limited resources in the Electron Club / SOLDER group for building these kits, if you have the following items please bring them along to help out:

And - to test out the kit once built:

Don't feel this list is neccesary - only bring things along if you have them already!

We look forward to seeing you there at the Freeduino-building sessions!